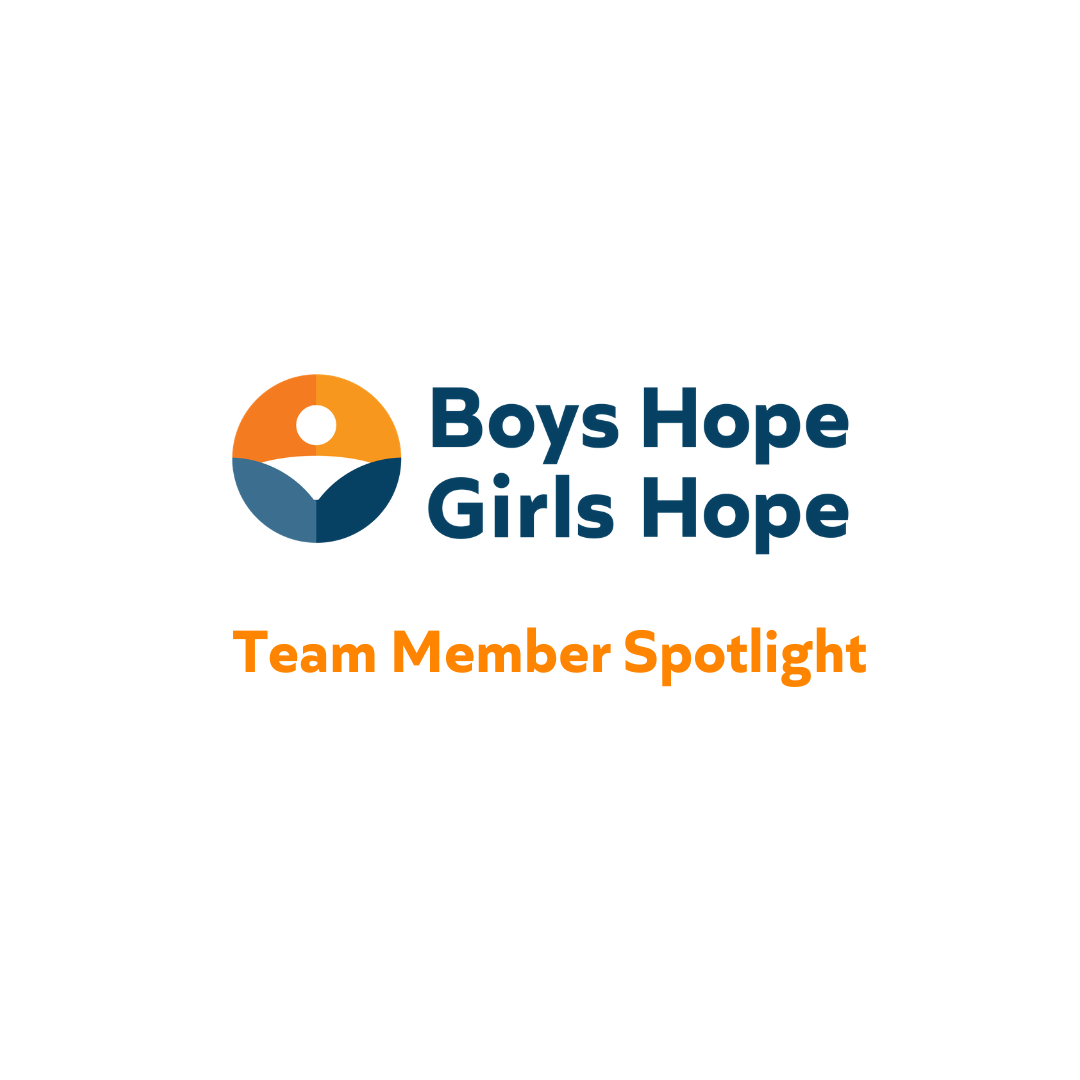 Boys Hope Girls Hope is excited to highlight team members whose time serving on the team has had a major impact on scholars, collegians, alumni, and colleagues. This month, we’re chatting with the Executive Director of our Guatemalan affiliate, Esperanza Juvenil. Lucas Pinzon is celebrating 15 years at Boys Hope Girls Hope!

Lucas with an Esperanza Juvenil graduate.

Patience Randle: You’ve been the Executive Director at Esperanza Juvenil for 15 years now! How does it feel?

Lucas Pinzon: Yes, wow! It has been a very fulfilling opportunity for me. It’s given me a chance to accompany many scholars from the beginning of their education until the end.

Patience: How did you first learn about Boys Hope Girls Hope, and what made you decide to take on the role as Executive Director?

Lucas: I went to college in the United States, because I received a scholarship to study there for four years. One thing I always had in my mind was to come back to Guatemala and to make an impact here based on the education I got when I was in the U.S.

I actually grew up in the same home for boys as Benito, the husband of President and CEO, Kristin Ostby, so we all knew each other. Kristin knew that I had just returned to Guatemala from the U.S. She had this position available at Esperanza Juvenil back in 2005. That’s when she invited me to be a part of the program. Based on how I grew up, I didn’t hesitate to get involved, because I was in the same position as the scholars when I was a kid. I saw it as an opportunity for me to serve these scholars as I was served back then.

Patience: How do you connect personally with the mission of Boys Hope Girls Hope?

I relate to that because that’s how I grew up. I am the sixth of seven siblings, and I grew up in a home in the west part of Guatemala. We were sent to school, but no one was watching over us, therefore we weren’t really doing well in school.

My mom was the one providing financially for us. She would go to the fields and pick crops, so we had no one to check that we did our homework.  She was busy working, and she couldn’t read or write.

"Based on how I grew up I didn’t hesitate to get involved because I was in the same position as the scholars when I was a kid. I saw it as an opportunity for me to serve these scholars as I was served back then."

Lucas with an Ezperanza Juvenil scholar.

A scholar hugging her mom.

Patience: Can you tell us about a favorite memory you have of a scholar at Esperanza Juvenil?

Lucas: One scholar, in particular, had so many struggles that he had to push through, but he finally finished high school with us. One time later, he visited me and said “thank you so much for being patient with me, because I didn’t have any other family that could provide what you provided in the end. And, I’ve become what I am right now because of you guys.” That’s really fulfilling for me to see those cycles being broken by Boys Hope Girls Hope.

Transformation of school into a fuctional dorm.

A board member donated their construction company services to make this happen.

Esperanza Juvenil runs a total of eight homes and two school campuses, and serves 77 scholars in residence, 67 scholars who continue to live with their families, and 47 in college.

Patience: The story of the school campus being converted into residences during COVID is an amazing story. Can you tell me about that? What did Esperanza Juvenil do and why?

Lucas: We have a very committed Board of Directors, and that is crucial in this difficult time of the pandemic. One thing that the Guatemalan government decided was to close all the schools in March 2020, and that continues to now because there are no vaccines here yet.

Our board encouraged our team to stop and say, “Hey, what can we do to help and support these scholars?” Our scholars, more than ever, need a safe environment to learn and continue their education.

So, we have these two facilities that we weren’t using because schools were closed.  The board agreed that we should invite those scholars who live with their families to move into the schools because there are resources here that they don’t have at home. Esperanza Juvenil has internet, computers, and other necessities. We have 67 scholars living with their families and out of those 67, 38 of them have moved in.

One board member owns a construction company and volunteered to make the classrooms look more like dorm rooms. They built showers and prepared rooms for the scholars. In January of this year, the schools were ready for them to move in. In a matter of two weeks it was finished! That was a great decision, because the scholars seem very comfortable being with us, and they now have a safe space to continue their education.

Patience: How do you continue to grow and develop as a leader?

Lucas: Always being able to listen to colleagues and to meet with them has given me the opportunity for me to learn from them. I will say the ones who are working with me right now have helped me become a better person, and by becoming a better person I’ve become a better leader. Aside from that, leaders must always be willing and open to learn. One of the ways that I do that is read a lot of books on leadership. I’m reading one right now called The Advantage by Patrick Lencioni.

Patience: Can you share what hope means to you?

Lucas: For me hope is an opportunity to become someone you always wanted to be. Hope is what makes you move toward your goals, to dream of becoming someone that you always dreamed of being is hope.

There are many things that can be challenging, but remember that you are not alone. You can do it, even if you have bad days, those days will be over and hope will come.

That’s what hope means to me, that you are able to surpass those challenges and continue dreaming of those goals you have in your life.

"For me hope it is an opportunity to become someone you always wanted to be. Hope is what makes you move toward your goals."