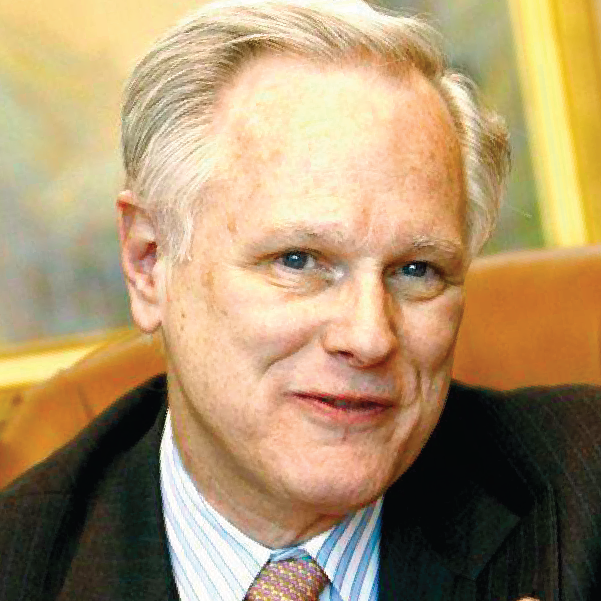 Mike de Graffenried took a phone call from a friend about Boys Hope Girls Hope in 2001 and has continued to answer on the first ring ever since for the organization and its scholars. Over the past 20 years, Mike has distinguished himself with tremendous leadership, generous support, and unwavering dedication.

A native New Yorker, Mike earned degrees in political science and law at Saint Louis University. After SLU, he earned a master’s degree in public and international affairs from the University of Pittsburgh and embarked on a storied international business career. In 31 years at Citibank, he held progressive leadership roles until retiring for the first time in 2004. That same year, then Boys Hope Girls Hope CEO Paul Minorini recruited Mike to join the Network Board of Directors. Mike has been a part of many key Boys Hope Girls Hope initiatives since then, including the launch of Academies and the expansion of Latin American programming. After coming out of retirement as founding CEO for Qatar First Investment Bank, Mike served as Boys Hope Girls Hope Network Board Chairman from 2011 to 2016.

While at SLU, Mike met his future wife, Pilar, a native of Colombia. The couple celebrated nearly 49 years together until Pilar’s passing in 2021 after an extended illness. Mike and Pilar shared a passion for Boys Hope Girls Hope, visiting with scholars in Latin American residences and inviting them to tour the ship on which they were living. Their son Chris de Graffenried and his wife Amanda are both professors at Brown University. They have one granddaughter, Sophia.

Boys Hope Girls Hope is honored to recognize and celebrate Mike’s immeasurable contributions to helping young people achieve their goals and become persons for others.

About University of Denver | Partner in Hope Award Honoree

A trailblazer in creating college access, affordability, and achievement for first-generation students, the University of Denver (DU) is a tremendous partner in bolstering Boys Hope Girls Hope collegians as they write their own success stories.

Through DU’s Pathways network for education equity, students served by community-based organizations like Boys Hope Girls Hope have access to a team of specialists in admissions, financial aid, and college transition and to additional funding to boost DU financial awards. DU also offers a robust selection of support and campus-engagement programs for our collegians, including the DU 1GenU program (a four-year developmental and community-building program for first-generation students and their families), the Presidential Leadership Program, the Excelling Leaders Institute, the Honors Program, and IRISE, an initiative that supports interdisciplinary research on issues of inequality, social justice, and inclusivity

Founded in 1864, DU is the oldest private university in the Rocky Mountain region of the United States. We are delighted that four Boys Hope Girls Hope collegians are currently adding to this legacy as DU students, and they are thriving. Boys Hope Girls Hope is pleased to join forces with and recognize the University of Denver as it works to “offer all students the opportunity to build the skills, knowledge, and perspective to make a difference in our world and create real, lasting change.”

While she has been the development director for Boys Hope Girls Hope of St. Louis since 2009, Jan Wacker’s dedication to the mission goes back even farther to her days as a volunteer. The depth of her commitment shows in the success of scholars and the entire St. Louis team.

Every scholar that walks through the door is family to Jan. From car rides and ice cream treats to summer jobs, camp scholarships, and sports equipment, Jan learns about and helps fulfill the needs and interests of scholars to ensure each feels known and included. She celebrates wins and empathizes with losses. She is there for scholars at all hours of the day and night.

Jan’s attention to people extends to donors, board members, and teammates. Even as she tirelessly brings in funding to support programs, she remembers details like birthdays and family milestones. She is not shy about letting people know their work is valued and appreciated. Jan shares tips for donor engagement and fundraising with affiliates across the Network and asks questions to promote fruitful sharing. She embodies what it means to build a community.

Exemplifying the spirit of being career-ready and community-minded, Boys Hope Girls Hope of San Francisco alumnus Raymund Deng graduated with a bachelor’s degree in political science from the University of California, Davis, in 2016. He went on to graduate from the University of California Hastings College of Law in 2020 and passed the California bar exam. Today he is pursuing a career in law as a way to live out the Boys Hope Girls Hope mission and most recently joined the firm Triple Point Capital as an associate attorney.

Although his time was stretched during law school, Raymund found ways to support Boys Hope Girls Hope by serving on a career panel and providing feedback on programming. At the Collegiate Prep Networking Night, he has helped rising first-year college students define life goals and spoken about his passion for serving others and supporting those in need.

Boys Hope Girls Hope of Illinois alumna Michallé Fain knew that she wanted to be a teacher since second grade. Never losing sight of her goal, Michallé graduated from Marquette University in 2016 with a degree in elementary education and English literature. She dreamed of returning to her childhood neighborhood to give back as a teacher, and KIPP One Academy, a public charter school in Chicago, hired her. Since then, she has been teaching, including stints as a fourth-grade math teacher and grade-level chair. Most recently, KIPP promoted Michallé to vice principal. Says Boys Hope Girls Hope of Illinois executive director Karen Croteau, “I had the honor of visiting Michallé in her classroom, and to say her students love and admire her is an understatement. She connects with her students in such a respectful and graceful way. She is committed, professional, and wise.”

The Boys Hope Girls Hope Vatterott Award, named for its inaugural recipient John Vatterott, celebrates the legacy and impact of an extraordinary visionary—an exemplary man or woman for others—whose generosity, determination and philanthropic support has sustained the vital work of Boys Hope Girls Hope on behalf of scholars, collegians and children in need.

The Boys Hope Girls Hope Legacy of Hope Award is for a member of our alumni community who exemplifies the spirit of being college-educated, career-ready and community-minded.